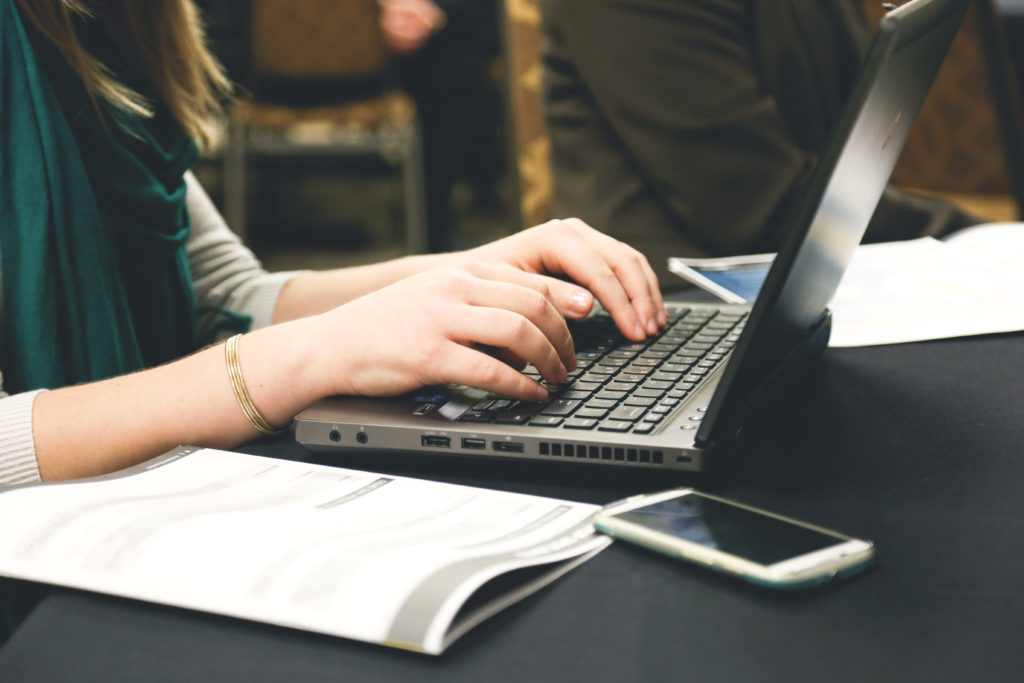 Writing is hard. It takes a while to wean ourselves off that Hollywood-coated lie of pumping out the next New York times bestseller within an afternoon at an indie coffee shop. Instead, it is a slow process of grinding away, regrets, networking with publishers, reading, regret, deciding if the Oxford comma is appropriate, and regrets about what you could have done to become a better writer.

Fortunately, one habit that writers have is generous writing advice for budding authors. For this month’s “Writer’s Unblocking ” our past and upcoming Draft readers were happy to rustle up a list of writing habits they wish they adopted sooner.

“I have been writing poetry since my early teens and have no pattern for working. Many writers I know work at a specific time, some need the anonymity of a café table, others work only in their underwear in the middle of the night, others work at dawn and take no food or drink before they have written. So many different ways of accessing the imagination. I have gradually learned that I have no set place or time, as I write chiefly in my mind. At random I make a few notes by hand on scraps of paper, Gradually the scraps get made into files, put into folders, some abandoned others taken up as I begin to assemble the structure of a work. A computer is the very last stage for me of composition. This is true for me whether it is poetry or prose. It has taken me years to acknowledge that the only way I can work is in this very random way. I often wish I were more regular in my methods but after so long I must simply accept that writing goes on for me all the time and eventually finds its way to the surface somehow.”

Karen Mulhallen has published more than twenty books and numerous articles on the arts. Her latest book of poems is Seasons in An Unknown Key ( Tightrope Books, 2017) and her most recent essay is “ My Life in Clothes & Books, a Memoir” ( numerocinqmagazine.com, December 2016).

So many of them! I narrowed it to five (prioritized from most important to least):

Growing up in the Niagara region during the cold war, Terri Favro was told, “if they drop the bomb, we’ll be the first to go.”  Her experiences inspired her new novel Sputnik’s Children, published by ECW. Terri is also a CBC Literary Prize finalist and co-creator with Ron Edding of the Bella comic book series. Her work has appeared in the Humber Literary Review, Geist, Prism. Room and the anthology Clockwork Canada: Steampunk Fiction.  A new novel, Once Upon The Time In West Toronto, is upcoming from Inanna. Terri lives in Toronto and blogs at terrifavro.ca

I downloaded FREEDOM app which turns off my internet for a given amount of time. I should have the discipline NOT to be distracted while working, but I am a person of weak character and having the internet turned off mechanically helps.  I tend to turn it off for three hours at a time.

Then I feel excited seeing that there is only, say, 45 minutes to go before I can check my email. So I knuckle down to work and lo and behold, FREEDOM snaps off, I’ve worked in a focused way, and now I can fritter away my time without guilt.

Ann Ireland is a novelist and Academic Coordinator of Ryerson University’s Chang School of Continuing Education, Writing Workshops program. Her work has won the Bantam/Seal First Novel Award, University Of British Columbia’s ‘Outstanding Young Alumnus Award’ , and has been nominated for the Governor General’s Award; The Rogers/Writers Trust Fiction Award; the Trillium Award; the WH Smith/Books in Canada First Novel Award and Barnes and Noble’s ‘Discover These Great New Writers’ award.  In addition to fiction-writing, Ann writes feature articles for Canadian Art magazine, is a Contributing Editor to Numero Cinq magazine, and is past president of PEN Canada.

Quitting when I felt like not continuing. It is told to anyone who has started writing that writing is about crafting language and it takes a lot of time to learn and master the craft. It is told that the romantic genius who is driven to insanity with goddesses of muse is just a myth, and no one writes a novel in one round. Even though I fully agree that pure inspiration is nothing more than a myth and writing is definitely at least %90 craft – there is something that happens sometimes and whatever that thing is (which can be called inspiration or muse or something else), it is what makes the work a living creature with its own destiny in reader’s minds.

Some texts are stillborn. It is important to accept it and leave it. Some texts die in the making, and some texts just happen to become something in one afternoon like a miracle child.

There have been years in my life in which I never wrote down even a single word in any creative sense. It wasn’t writer’s block – it was loss of meaning that stopped me. After writing intensely for many years and dealing with a variety of literary cultures I can say one thing about my own writing: I can’t write (creatively) when what I am doing stops making sense to me. I am writing primarily to communicate things to an imaginary audience, or probably to an ideal reader. As a meaning-driven writer, when I lose that living spirit in the text (the meaning, which sparks the inspiration through the desire to communicate); I stop. I stop because there is nothing more I can tell to the ideal reader who has committed their time and mental energy to me.

So this is the habit I wish I had all along: to stop each and every time when I realize I don’t have anything to say to the world.

Deniz Basar is a doctoral student at the University of Toronto’s Centre for Drama, Theatre, and Performance Studies. She has a Master’s Degree in Modern Turkish History from Bogazici University with her graduation thesis named “Performative Publicness: Alternative Theater in Turkey After 2000s”, and she had her Bachelor’s Degree in Mimar Sinan Fine Arts University in Urban Planning. Her award-winning play “The Itch”, in which she worked with the potentials of allegory to make a counter-narrative of the current political situation in Turkey, was published in Turkish in 2015. In February 2016, her play “In The Destructible Flow Of A Monolithic, Vast Moment” was chosen for the Derbent project, an independent initiative of Iranian-Turkish Theatre groups.

If my writing habits reveal anything about me, they reveal that I am a modern Luddite.

Most of my work gets done as though personal computers are invented but the internet is only an afterthought. Hiking through wooded areas is important. As well, I physically go to libraries, I scribble on paper using a pen, I make notes in the margins of paper books; and even if I research online, I print the essays, staple them, and scatter them over my bedroom and living room. Trapped in a time warp from living in Farmville circa 1995, my writing habits started so soon that archaeologists use them to date pottery sherds.

Nonetheless, I am a late adopter even of print media. Since beginning my life as a legal scholar, my family graciously buys me a paper subscription to the Globe and Mail, which arrives every Saturday morning. Lately, I’ve actually cut articles out of the paper and made notes on them. These include imagined replies to the journalists, references to academic sources, inferred character traits, yadda etc. The articles swish around my living room and eventually settle in a cardboard box. Routinely, the cardboard box is shaken out and the articles get sorted.

I almost never write about the actual news events, but I do write about law, and that means following the news. Every legal essay needs to be revised because of updates before the second draft is even complete. As for poems, it’s the stories that repeat that remind me of important themes. Each week, articles that develop a story add more strata to my poetry’s relevance. Over time, layers of clipped context measure a poem’s value against the layers of poetry editors’ rejection letters.

Terry Trowbridge is a PhD student in Socio-Leqal Studies at York University, Toronto. His Poems have appeared in a few academic places including The Canadian Journal of Family and Youth, Canadian Woman Studies, Relational Child and Youth Care Practice, American Mathematical Monthly, The Journal of Humanistic Mathematics, The Mathematical Intelligencer, Law and Humanities, and in slightly less academic places like Briarpatch, Untethered, (paranthetical), subTerrain, Carousel, The Great Lakes Review, Whether Magazine, and some chapbooks from Grey Borders Books.

Be sure to meet Terri & Ann at the upcoming Draft Series 12.5 next Sunday, April 23 at the Flying Pony Cafe, at 3pm. 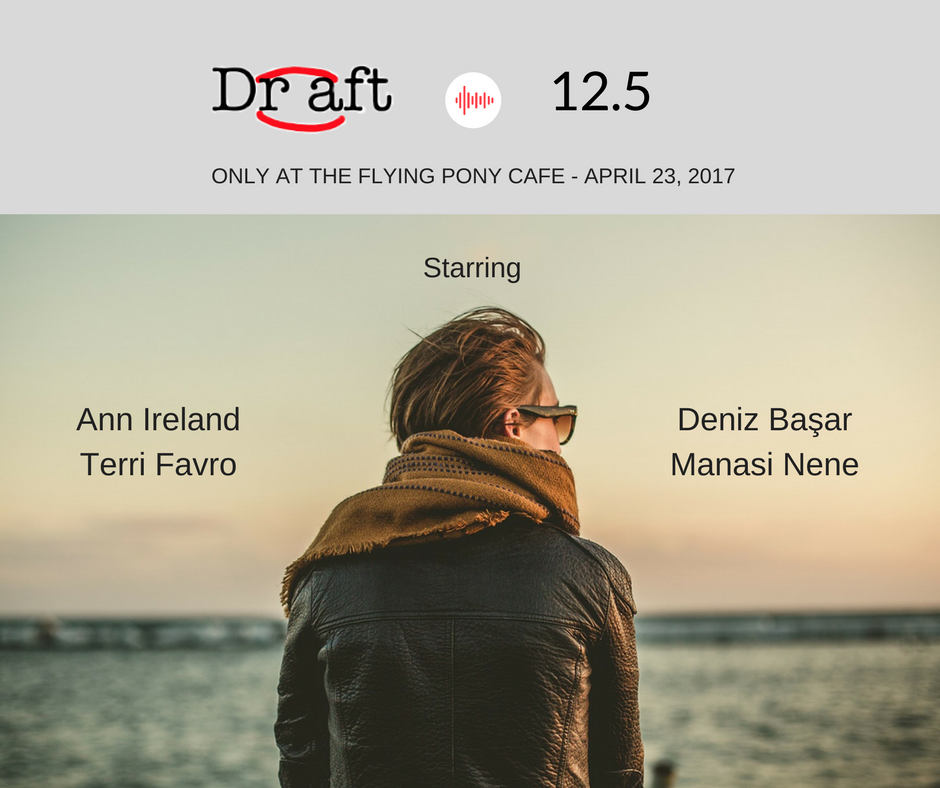